The Real Secret to Success as an Athlete

Within the past 11 years, I’ve coached hundreds of athletes of all different ages.  I can honestly say that I have never met a single one who in my eyes didn’t possess unlimited potential.  When I say unlimited potential I don’t mean only in an athletic sense, but as human beings who have so much to offer the world as they continue to grow and develop.  This is how I see my athletes.  See I know that there are so many factors that either promote or prevent a young woman or man from excelling athletically.  On the surface there is just talent, some will work hard their entire life and just never possess the talent to be an elite athlete.  But as you dig deeper it starts to become more complex: laziness, poor interpersonal skills, lack of emotional control, unstable home environment, or simply doing all the wrong things (ignorance) for their development are only some of the many reasons why athletes don’t succeed in their sport of choice.  This is why at our gym, the Boost Performance Center in Corona CA, we focus on Effort. 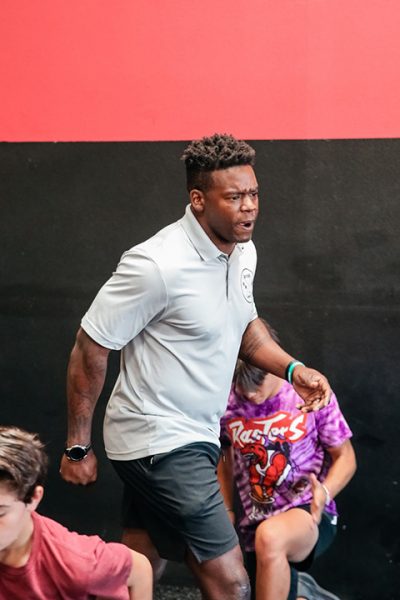 As a strength and conditioning coach, it’s more 60% coach and 40% science in my approach to athletes.  It’s not that I don’t respect and appreciate the science behind athletic development, it’s just that in all my years of being a coach I’ve never had a parent or anyone for that matter ask me about my credentials.  To be honest, most people don’t even know what a CSCS or USAW certification is.  But what I do constantly hear is how hard I push my athletes and how much I care about them.  Because the old saying is true: people don’t care how much you know until they know how much you care.  I focus on coaching effort with my athletes because at the end of the day what else can I expect?  Sure I can improve their athletic performance and help them become bigger, stronger, faster, more explosive. But effort transcends sports, and affects the way these young men and women approach every aspect of their lives.  That’s having an impact, and when it’s all said and done as a coach that is what I live for, making a positive impact on the athletes I work with.

When you think about it, emphasizing effort is the best attribute you can develop with your athletes over any and all physical qualities.  As a former athlete I have competed at the highest levels and I can tell you for a fact that the higher you climb the ladder of athletics the less is becomes about athleticism and the more it becomes about the person who’s willing to put the more work in, or in another way who is unwilling to be outworked.  There are a countless number of individuals who possess great speed, explosiveness, endurance, etc…but there really aren’t that many who are willing to put in relentless amounts of effort to ensure their success.  And what’s great about focusing on effort, is that it often transfers to other aspects of life because it becomes a habit.  Putting in great effort starts to extend beyond the field, court, track or pool, and starts becoming a state of mind.  Because if you’re seeing how far effort takes you in athletics, you can only imagine how far it’ll take you in life.  This is why I coach effort, because if I can get you to work incredibly hard for me, I can convince you to work incredibly hard for yourself. -Boostman